In December, Wiki Education attended the American Geophysical Union’s annual meeting in New Orleans. We recruited several university instructors interested in assigning their students to improve Wikipedia’s coverage of geology and earth science. One prior student of our Classroom Program approached us and commented that doing a Wikipedia assignment gave him more confidence in his understanding of the material. Attendees at this meeting were especially excited that content mastery is one learning outcome students experience when they turn their research projects into Wikipedia articles.

December is a busy month for Outreach Manager Samantha Weald, as she works closely with instructors joining the Classroom Program for the first time, helping them navigate Wiki Education’s suite of tools and training materials for them and their students. In addition to running two outreach webinars, one for Butte College in California, and another for the University of Maryland, she worked to onboard 47 courses taught by new instructors in preparation for the Spring 2018 term.

Final impact of the Classroom Program for Fall 2017 in numbers:

We held our final office hours of the term in December. They are always productive sessions during which instructors share triumphs and concerns, or ask questions that they have been considering all term. We are looking forward to offering more office hours in 2018 since they are ideal spaces to gather programmatic feedback and connect with instructors!

We are all extremely proud of our Classroom Program participants, students and instructors alike. The numbers speak for themselves, but the individual contributions really shine. This was an impressive year for our program. We are grateful for all of the new instructors who took a risk to try something new and exciting with this assignment. We also appreciate all of the instructors who have worked with us before and enthusiastically returned again.

For women, trying to break into the male dominated field of medicine as a physician was a difficult task in the early 20th century. Ailie Gale, however, met this challenge head on and upon graduating in 1905, was one of only four women in the graduating class. After graduating, Gale decided against practicing in the United States in favor of joining a Methodist mission and working in China as a physician. While there was some resistance to Western medicine over traditional Chinese remedies, an overall lack of doctors in China gave Gale a greater opportunity to practice medicine than she would have enjoyed in the United States. Gale’s initial objectives were to spread and promote Christianity, something that eventually changed to a focus on the economic and social needs of rural China. During her stays in China, Gale became the hospital administrator of Chadwick Memorial Hospital, which she helped restore. Throughout her work, Gale experienced resistance to “outsiders” as well as increasing political tensions due to the Second Sino-Japanese War, which necessitated her reluctant evacuation. Gale would keep returning to China and continuing her efforts to help others until 1950, when the Methodist Episcopal Board pulled their missionaries out of China due to the Communist victory of Chinese Communist Revolution in 1949. If not for University of Pennsylvania educator Kent Bream’s Medical Missionaries to Community Partners class, Ailie Gale would have still lacked an article on Wikipedia. Thanks to them, the gender gap closes just a tiny bit more.

One student in Sara Galletti’s Art in Renaissance Italy class at Duke University chose to improve the article on Jacobello del Fiore, a Venetian artist in the late fourteenth century and early fifteenth century. Theorized to be the “Master of the Giovaneli Madonna” that created a Crucifixion piece currently held in the Matthiesen Collection in London and the Virgin and Child of Piazzo Giovaneli, del Fiore was commissioned to decorate the Sala del Maggior Consiglio (Hall of the Great Council) in the Doge’s Palace, an opulent Venetian Gothic style palace in Venice, Italy.

There’s a real sense of satisfaction in writing a Wikipedia article that covers almost everything that’s known about a topic in a neat, coherent package. But it can be equally satisfying to write an article that doesn’t even include everything that’s been written about the topic on Wikipedia. With bigger topic areas the best article provides short, relevant, balanced summaries of the topics, while pointing the reader to more detailed Wikipedia articles about that topic. Students in George Waldbusser’s Biogeochemical Earth class produced articles of both types, including detailed articles on Nutrient cycling in the Columbia River Basin and Haida Eddies, and a more broadly-focused article on Oceanic carbon cycle.

A Frank Statement was an advertisement put out by tobacco companies in 1954. It was designed to create doubt in the minds of the public about the science research into the health effects of smoking. A student in Robert Bazell’s Issues in Medicine and Public Health class expanded an existing Wikipedia article about the advertisement, putting it in context and documenting the strategy of social engineering behind it. An important first step in making the connection between cigarette smoking and lung cancer came with the publication of the 1950 Wynder and Graham Study. While it’s exceedingly rare to write a Wikipedia article about a single research study, this study and its impact is widely discussed by secondary sources.

Several students in Sara Galletti’s Art in Renaissance Italy class at Duke University uploaded lovely photographs of art from Renaissance Italy. The first is a closeup look at part of the Carrand Triptych, which is believed to have been created by Giovanni di Francesco. Another is a page from Libro de’ Disegni, which contains work by Giorgio Vasari.

And here is some notable student work, nominated to appear on the Did You Know section of Wikipedia’s main page:

Community Engagement Manager Ryan McGrady spent most of his time this month preparing for the kickoff of our Wikipedia Fellows pilot. After we made the initial announcement in November, we saw an exciting outpouring of interest in the project. In total, we received about 90 applications! Ryan reviewed the applications and collaborated with our partners at the National Women’s Studies Association, Midwest Political Science Association, and American Sociological Association to select our 9-person pilot cohort. Our hope is that the pilot will be successful enough to continue on a larger scale in the future. Many of the applicants who will not be participating are nonetheless highly qualified and we’re delighted that many have confirmed interest to join us in the future.

There are several highlights from Visiting Scholars this month. Gary Greenbaum at George Mason University developed the article on the Rhode Island Tercentenary half dollar, bringing it to Featured Article status. The commemorative fifty-cent piece was struck in 1936 and depicts the state’s founder, Roger Williams. Oddly, although it was intended to honor the 300th anniversary of Providence, the city isn’t mentioned on the coin. The coins sell for hundreds of dollars today. Gary also made major improvements to the article on 11th U.S. President, James K. Polk. The article had been a Featured Article from 2005–2008, but Featured Articles are subject to review if the quality doesn’t remain sufficiently high. The status was removed in 2008, and with Gary’s efforts it is back in the peer review process.

Barbara Page at the University of Pittsburgh continued to improve Wikipedia’s coverage of women’s health topics. This month, she made substantial improvements to articles including cystocele, vagina, and miscarriage and grief.

At Brown University, Visiting Scholar Eryk Salvaggio’s article about algorithmic bias appeared on Wikipedia’s Main Page as a Did You Know:

“[Did You Know] that algorithmic bias can sometimes lead computers to produce homophobic, racist, and sexist results?”

Finally, as of the end of December, Rosie Stephenson-Goodknight has created or improved an incredible 229 articles about women writers as Visiting Scholar at Northeastern University. A great example from this month is Lurana W. Sheldon (1862-1945), an American novelist, poet, lecturer, editor of two weekly newspapers, and activist in support of suffrage and opposed to prohibition. As the article says, “She claimed to have earned her living in fifteen different and totally dissimilar lines of business, including bookkeeping, business management, journalism, work in a chemical laboratory, buying dry goods, and writing stories.”

This month, we featured some stories of exceptional student work on our blog. Andrew Hatelt, a student at York University, won his university’s fourth-year faculty writing prize for the Wikipedia article he created in a Wiki Education-supported course. We also featured a guest contributor on our blog: Ariella Rotramel, Vandana Shiva Assistant Professor of Gender and Women’s Studies at Connecticut College, shared her experiences teaching with Wikipedia.

In collaboration with Wiki Project Med Foundation, Osmosis, and University of California San Francisco Professor Amin Azzam, we also developed a new resource for medical studentsto use when editing Wikipedia.

In December, we added several new features to the Dashboard for tracking specific topic areas and generating more detailed data reports, completed one major upgrade of the Dashboard’s software platform, and made considerable progress on another. The project reached a new milestone in code contributions, with now more than 60 contributors.

Outreachy intern Candela Jiménez Girón started on December 4, and has made rapid progress on user experience improvements that will smooth the way for Art + Feminism 2018 and other programs that make heavy use of Programs & Events Dashboard. Outreachy and Google Summer of Code alum Sejal Khatri also received a Wikimedia Foundation Project Grantto further improve the Dashboard’s support for edit-a-thons and make its mobile interface better.

Product Manager Sage Ross updated the Wiki Education Dashboard to use the newest version of the Ruby programming language; dashboard.wikiedu.org now runs Ruby 2.5 (along with the latest release of the Ruby on Rails web framework). Under the hood the Dashboard is faster than ever, and work is underway to upgrade its JavaScript user interface to follow best practices and use the newest version of the React framework.

For the month of December, expenses were $138,457 versus the approved budget of $182,842. The ($44,385) variance can be attributed to: administrative professional services slotted for December occurred in November ($11K), unused Program Travel allotment ($9K) as well as unused allotment for Program outside services ($19K) and other direct operational costs ($5K). 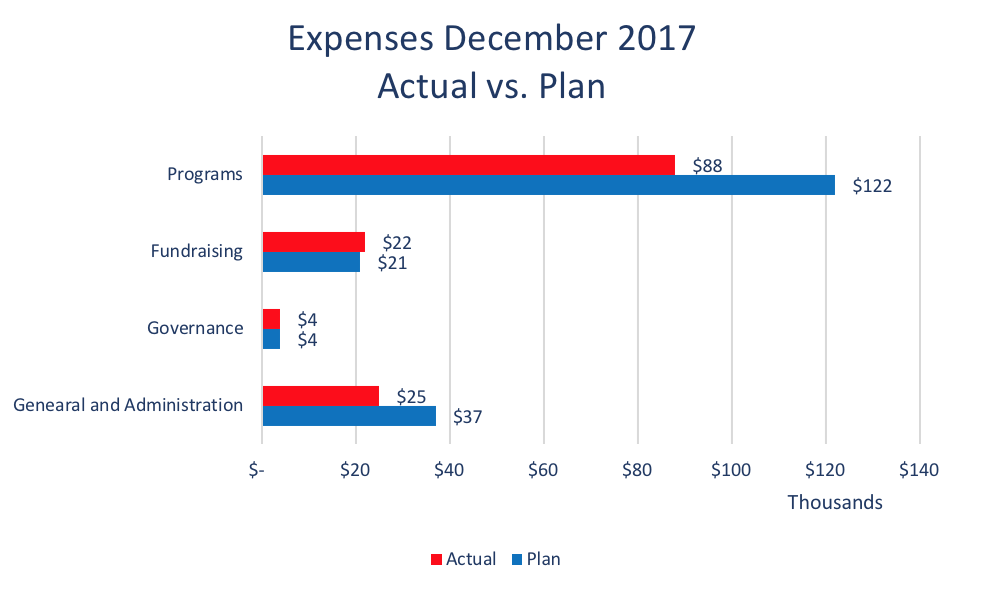 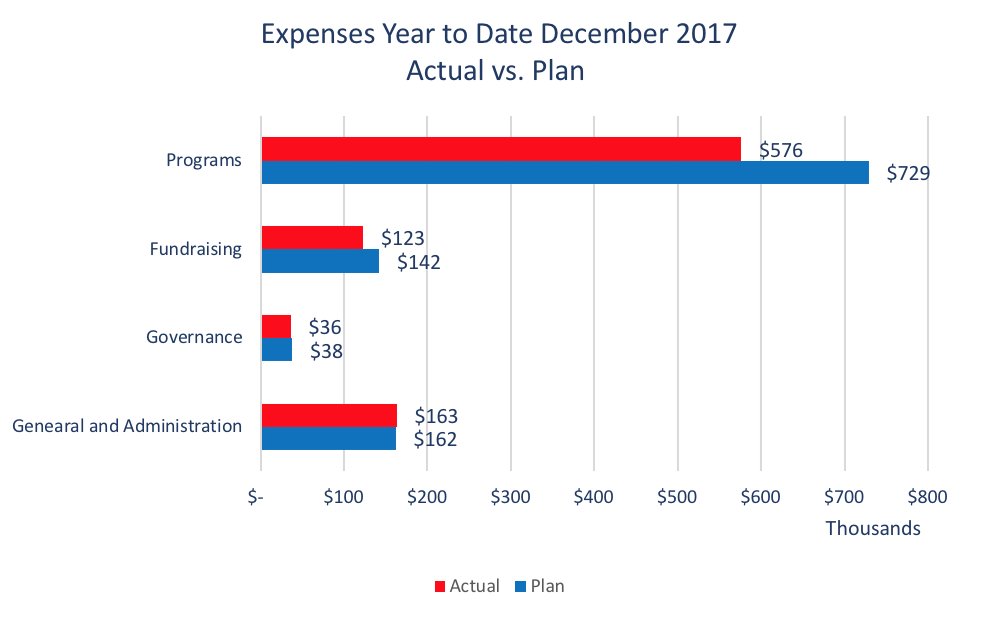 Executive Director Frank Schulenburg and Director of Development and Strategy TJ Bliss traveled to New York City for meetings with several potential funders and partners. We are continuing to experiment with our approach to fundraising with Topic Sponsorships.

In December, Frank continued working on Wiki Education’s new strategic plan. This work has been informed by input from board members, staff, and members of the senior leadership team of the organization. The plan will inform the work of Wiki Education for the next three years and is expected to be published in May 2018.